WELCOME TO THE MENU OF THE MENUS PRESS ARROWS TO SELECT AND SPACE TO GO THIS MENU WAS ENTIRELY CODED BY MIT ALL GRAPHICS BY CHROMIX EXCEPT THE FONT BY JUMPING JACK FLASH MUSIC BEAT (c) NEXT APRIL 1992 NOW SOME INFORMATION ABOUT THE MENUS SHADOW MENU , YOU MOVE THE BEAST WITH THE ARROWS, WHEN YOU WANT TO SEE A SCREEN, PRESS SPACE, RETURN OR ENTER DUNGEON MENU , FIND ALL THE DOORS BEWARE OF THE TELEPORTING AREAS, THE ROTATIVE PADS ,AND THE DUMMY WALLS THERE ARE SOME HIDDEN SCREENS, FIND THEM THE ALTERNATIVE MENU ,YOU CANNOT SELECT THE HIDDEN SCREEN WITH THIS MENU !! THE AMIGA MENU , LIKE THE AMIGA DEMOS THE SCREENS ARE LOADED, NO SELECTION YOU CANNOT SEE THE HIDDEN SCREENS, LIKE IN THE ALTERNATIVE MENU , GOOD LUCK !!! WE WERE PROUD TO RELEASE THIS DEMO !! ENJOY IT OR SCRATCH IT , BUT PLEASE , RESPECT OUR HARD WORK !!! SEE YOU SOON PERHAPS IN OUR NEW GAME OR IN OUR NEXT DEMO OR CHARTS !!!! BYE !!! SEE THE LOWER SCROLL TO SEE ALL THE GREETINGS !!!!!!!!!!! 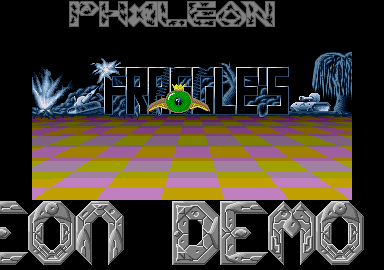 NOW SOME CHEAT MODES FOR THE MENUS :

FOR THE DUNGEON, IT IS A BIT TRICKY... SO READ THE FOLLOWING SENTENCES CAREFULLY:
AFTER PRESSING THE 'HELP' KEY, A MAP WILL APPEAR (ARE YOU STILL THERE ? IF SO, READ THE REST.) THEN PRESS THE 'ENTER' KEY: YOU CAN THEN TYPE A PASSWORD WITH YOUR LITTLE FINGERS. FOR EXAMPLE, THE WORD 'ZNORT' ALLOWS YOU TO RETURN TO THE JUNCTION OF THE WAYS...
IN SOME PRECISE LOCATIONS THERE ARE PANELS WHICH GIVE YOU ALL OTHER POSSIBLE PASSWORDS.
THE NUMBER OF PASSWORDS IS HIGH, AND YOU CAN ENTER THEM IN THE FOLLOWING LANGUAGES: FRANCAIS, ENGLISH, OR DEUTSCH.
BUT, YOU HAVE TO SELECT THE CORRECT ONE BY PRESSING ONE OF THE FIRST THREE FUNCTION KEYS.

ONE LAST WORD: ONE OF THESE PASSWORDS GIVES YOU THE POWERS OF A GOD UPON THE DUNGEON... FIND IT ! (DE TOUTE FACON, JE M'EN MOQUE !)
I WISH YOU A GOOD LUCK IN YOUR LONG QUEST FOR THE EXPLORATION OF THIS (WHAT A FUCKING LONG SENTENCE !) HUGE (IS IT ?) DUNGEON (WHAT IS IT ?).

I JUST WANT TO SAY THAT THIS GIGA DEMO IS THE BIGGEST ONE EVER MADE ON THE ST .... OF COURSE THERE WILL BE MANY OTHER DEMOS TO BE RELEASED SOON , YOU CAN SAY THEY WILL BE BETTER THAN THE PHALEON BUT I AM SURE THERE WILL BE NO BIGGER DEMO THAN OURS ....

HERE ARE NEXT MEMBERS DBUG II , MIT , CHROMIX , LAP , FFT , PULSAR , STWARS , LEM , ZAE THERE IS ONE NEXT SECTION ON AMIGA BUT IT IS NOT US, WE WILL PROGRAM SOON ON THE AMIGA AND KEEP OUR NAME NEXT SO BE CAREFUL NEXT AMIGA , WE ARE COMING ...... 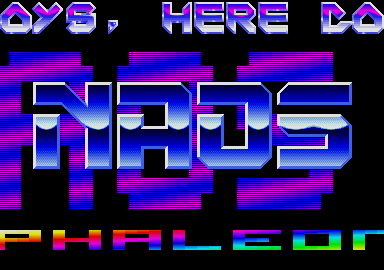 ARE YOU STILL THERE ? IN THAT CASE, I WONDER WHAT I WOULD TELL YOU, SINCE YOU MAY BE SO EXHAUSTED THAT YOU WOULDN'T BE ABLE TO UNDERSTAND THE REST ...
SO, WHAT ABOUT A CODING PARTY IN ANGERS (FRANCE) DURING THE FIRST WEEK OF AUGUST 1992 ? THIS IS ONLY A PROJECT FOR THE MOMENT, BUT WE WOULD LIKE TO KNOW WHETHER YOU WOULD BE INTERESTED IN ATTENDING SUCH A PARTY. IT WOULD BE ORGANISED BY OUR FRIENDS ALBEDO 0.12 (EX-CHAOTIC MOTION AND FASHION). PLEASE TELL THEM AS FAST AS POSSIBLE. IF THEY HAVE MANY POSITIVE ANSWERS, THEY'LL CONSIDER THIS ORGANISATION AS WORTHWHILE AND SEND YOU SOME INVITATIONS. THEIR ADDRESS IS :

THIS ADDRESS IS IN THE RESET DEMO TOO ...

ONE LAST THING : IF YOU THINK THAT MAKING STE-SPECIFIC SCREENS IS WORTHWHILE, PLEASE TELL US AND WE WILL CONSIDER DOING OTHER ONES ...

OH I FORGET, LET'S ADD ONE WORD ABOUT ATARI'S COMMERCIAL POLICY : WHAT MADE ATARI'S SUCCESS WAS ADDICTS MAKING COMPUTERS FOR ADDICTS, BUT SINCE ATARI HAD A LITTLE PROFESSIONAL SUCCESS IN AREAS LIKE DESKTOP PUBLISHING, PASSION HAS DISAPPEARED AS IF THEY WERE ASHAMED ABOUT WHAT MADE THEIR SUCCESS, TO WIT HAPPY HOBBYISTS ... SO THAT ATARI SHOULD SURVIVE, PASSION MUST COME BACK ... ATARI SHOULDN'T FORGET 'POWER WITHOUT PRICE' AND SHOULD KEEP ON MAKING ORIGINAL COMPUTERS, OTHERWISE ONLY IBM AND ITS SHITTY PC'S WILL SURVIVE ... AND IN SPITE OF THE PRICE CUTS OF THE PC'S, DON'T SELL YOUR ST TO BUY A PC, BECAUSE THE MORE POWERFUL THE PC'S, THE MORE DEMANDING THE SOFTWARE ... TODAY WE ARE INTRODUCING THE 586, WHAT WILL A 386 OR 486 BE IN ONE YEAR'S TIME ? INSTEAD OF STRUGGLING WITH COMMODORE, WE'D BETTER, WE MOTOROLA FANS, FIGHT AGAINST THE SUPREMACY OF THE SHITTY INTEL PROCESSORS (16 PAGES OF KNOWN BUGS FOR ONE CHIP ...). THE AMIGA AND THE ST AREN'T CHALLENGERS, BUT COMPLEMENTARY ... IT IS USELESS TO TRY TO DO WHAT THE AMIGA DOES BUT IN A WORSE WAY : WE'D BETTER FIND ORIGINALITY, OTHERWISE WE'LL ALWAYS STAY BEHIND ... 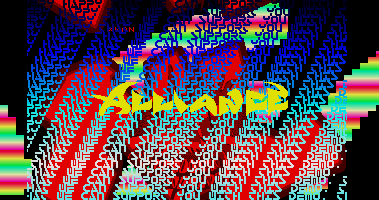 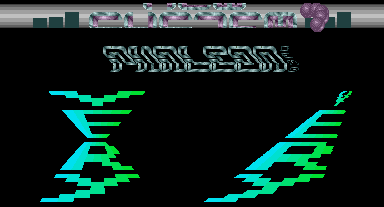 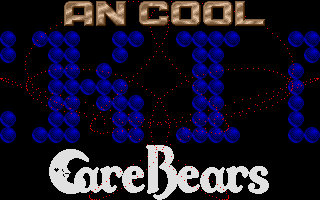 The Phaleon Demo, the biggest demo ever released on the Atari, has been released in 1992, the 20th of may.

It came on 4 disks full of demos from various crews.

The hidden screen
At the start, this demo was a projects of the Replicants, but they prove to be unable to organise, so NeXT took over the project...

In fact, the Phaleon Demo is the ultimate production of this period in term of "always more". Shortly, you have to know that at this time the competition reaches a very high level, and if you release something average you were consider as lamers.

In this logic, it was normal that we try to do "more" everywhere; so the Phaleon has more disk, more featured groups, more menus, more long scroll texts, more loaders, and so on...

The reset demo
The overall quality of the demo suffered of this because (excuse me but I really thinks this) at least a third of the demo screen ranges from average to bad.

Fortunately, many excellent screens help having a finally good demo.

How the demo is organised

The intro sequence
As most demo from this period the Phaleon respect the classical structure:

But being the "plus" demo, the Phaleon add some elements to this list :)

First, it does not have ONE loading screen, but TWO.

It's interesting, because on memory limited machines a little loader that just displays "LOADING" is faster to use that the full featured loader that plays sampled music with star field...

Second, the Phaleon does not have ONE menu, or even TWO menus... it does have FOUR; which are detailed below.

Finally, the reset demo is interactive, and allows the user to enter comments about the demo, and so you can know who visualise the demo.

Unfortunately, a conception problem forbid to skip the questionnaire filling to watch other people comments.

It sucks, but we were short in time as usual... Only one more bug !


The menu of menus

The only meaning of this menu, is to allow the user to choose which way he wants to use the Phaleon Demo.
It gives the choice between the Shadow of the Beast menu, the Dungeon Master, the fast menu, and the sequential Amiga loader.

For your pleasure we have taken the time to extract most of the scrolling messages, some written by Zae, some by the Angers team, you can find them spread over the left and right columns.

As you will see, ZAE was very good when he had to type kilometers of senseless bullshit, as well as out inability to write gramatically correct english.


The Shadow of the Beast menu

A Shadow of the Beast (the well known Amiga game) remix, with a 50 fps frame rate, left and right over scan, rewritten David Whittacker music, and so on.
This menu requires one megabyte of ram, but it's more usable when the ST has a least two megabytes since the menu and the loader have to be reloaded after each demo with one megabyte.

A full featured Dungeon Master remix, with sampled sounds, auto mapping, cheat codes, multi language support, teleportation areas, and random encounters.
A half meg ST is enough, but for the same reasons than the Shadow menu, a one megabyte ST is strongly recommended.

A simple list menu, that allows to directly choose one demo screen. Of course, it's the most efficient even if technically it has no special interest :)
Used with the fast loader, it allows to see all demos on a 520 ST without having to reload the menu or the loader.

A sequential "Amiga like" loader, that simply load all demos screens one after another.

The Phaleon Demo also included some preview screens of games being developed.

Krom, a role playing game developped by DNT Crew, with some coding help by Mit:

A demo-reel of soon to come products from Expose Software.

Here are a few videos of some of the best parts1 of the Phaleon Gigademo:

ACF Guest Screen:
A refreshing presentation, uncommon on the Atari ST at the time.

FOXX Guest Screen:
One of the older screens in the entire demo, but I really liked the way it looked.

Legacy Guest Screen:
Some nice 3D with a digital soundtrack

Bud-Next:
Because sometimes you don't need 50fps and stunning effects to be enjoyable.

Illusion:
Because I was right to push for having some STe specific demoscreen!

-NEXT-, IN IT'S COURTESY OF QUEST FOR PERFECTION PROUDLY WELCOMES YOU TO THE ULTIMATE BRAINBLASTING EXPERIENCE

2 YEARS, 4 DISKS, 17 DIES, A QUANTITY OF COKE EQUAL TO SWITZERLAND'S PRODUCTION, SOME COMPUTERS (AND LAMERS) SACRIFIED... BUT HERE IT IS THE ONE YOU WERE ALL WAITING FOR (TO SAY THE TRUTH : THE ONE THAT EVEN OURSELVES WERE WAITING FOR...) THE ULTIMATE GIGA-DEMO, THE ANSWER TO CENTURIES OF HUMAN QUEST FOR PERFECTION, THE... O.K. O.K.

IT'S PROBABLY A BIT TOO MUCH BUT YOU MUST ADMIT IT WORTHS IT ! NO ONE CAN IMAGINE HOW MUCH WORK THIS DEMO MEANS.... WELL, NOT THAT -I- PERSONALLY WORKED A LOT ON IT BUT BET THE CODERS DID ! TO GET THIS DEMO FINISHED THEY'VE ABANDONNED EVERYTHING : BEER-GIRLS-BEACH, ALL THESE THINGS THAT MAKES LIFE'S NOT A BITCH SOME OF YOU (MAINLY THE LAMERS) MUST BE WONDERING -WHY ?- WELL THAT'S -THE- QUESTION NO DOUBT THAT WE'LL FIND AN ANSWER TO IT QUITE SOON... WELL, HOPE SO.... PHALEON WAS MEANT TO BE THE BIGGEST DEMO EVER REALEASED AND I THINK THAT IT'S, SO FAR, ONE OF THE MOST ORIGINAL ALL OF US SINCERLY HOPE YOU'LL ENJOY IT AND I BET YOU WILL !

BY THE WAY, I WANT TO INFORM YOU THAT WE HAVE CREATED A FUNDATION AND THAT ALL DONATIONS ARE WELCOME : SEND YOUR OLD CLOTHES, TOYS, POWDER MILK, CHOCOLATE OR CIGARETTES AND YOU'LL SAVE FIVE HUMAN LIFES FROM FAMINE AND DYSENTERY SEND ALL DONATIONS TO : 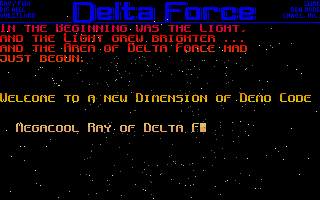 LAST BUT NOT LEAST WE MANAGED TO CREATE A VIRUS THAT WILL INFECT YOUR HARD DISK EVEN IF THIS ONE IS SWITCHED OFF (IT'S GONNA BE A HARD TIME FOR BRAINLESS LAMERS...) TO GET THE ANTIDOTE TO THIS VIRUS (IF YOU READ THIS IT MEANS THAT YOUR HARD DISK IS ALREADY INFECTED) THEN SEND 50 FRANCS TO THE -NEXT- FUNDATION FOR -NEXT- MEMBERS MENTIONNED ABOVE


THE VIRUS CAN'T BE DETECTED AND MAY DESTROY YOUR DATAS AT ANY TIME : SO HURRY UP ! BY THE WAY, WE'RE NOW WORKING ON A VIRUS THAT WOULD DESTROY YOUR COMPUTER EVEN IF YOU DON'T PUT THE DISK INTO THE DRIVE AND THIS VIRUS WILL ALSO BE ABLE TO OPEN THE DOOR WHEN SOMEONE RINGS, WASH DISHES AND TAKE OUT FOR A WALK YOUR DOG.....

DON'T SMILE : I BET HUNDREDS OF LAMERS ARE ACTUALLY QUITE WORRIED....

AT LAST, A GIGA GREETING TO ALL THE PEOPLE THAT MADE OF COMPUTER SUCH A FUN : HACKERS, CODERS, SWAPPERS, GFX MEN, MUSICIANS.... SUCH NAMES AS
B.O.S.S.
THE BLADE RUNNERS
TEX
STCS
THE REPLICANTS
TCB......

THINK ABOUT ALL THE GREAT TIME WE HAD, OF ALL THE THINGS WE LEARNED, ALL THE PEOPLE WE MET TRY TO WONDER WHAT WOULD HAVE BEEN OUR LIFE WITHOUT THIS SMALL PLASTIC STUFF CALLED COMPUTER AND THOSE PEOPLE WHO MADE OF IT PROBABLY THE COOLEST PERIOD OF OUR LIFE 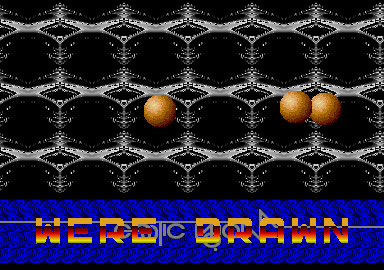 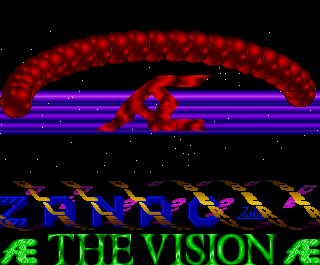 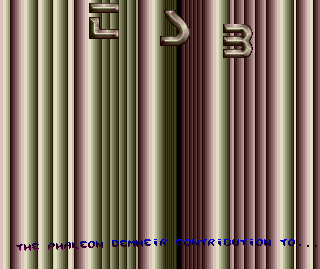 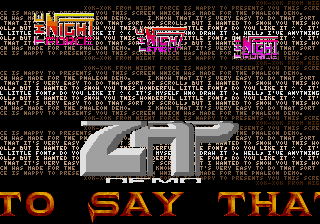